Showing posts from December, 2011
Show All

The year drawing to a close should be declared the Year of Free Speech, not just in India but across the world. The world has witnessed people's movement for democratic rights on an unprecedented scale. Starting with the elections in Iran, through Tahrir Square in Egypt, to the "Occupy" movements all over the world, individuals have chosen to wrench back the initiative from the oppressive governments and predatory corporations and they have done this primarily through those genuine marketplaces of ideas: the social networking sites. A few years ago, at any conference on media, Indians could be justly self-righteous for the apparent freedom we enjoyed for free speech even as in our neighbourhood as every nation-state was still grappling with dictatorial/theocratic governments. Indian democracy may well have been an inspiration for some of the uprisings in the world.

Then, in the last quarter of this year, two influential voices in India-- …
Post a Comment
Read more


There is also a relentless process of mergers and acquisitions in the media industry which is resulting in large corporations straddling print, television, radio and new media and consolidating further. In the latest news about such mergers the multi-national corporations are making inroads into the regional space rapidly. So far, even though the nature of ownership, working conditions of the employees and the content left much to be desired, ownership in the regional space was dispersed. Beginning with the acquisition of Asianet in Malayalam, this process is picking up pace.

Without going into the much-debated issue of media monopolies and their implications for democracies, it is interesting to see that there have been no regulatory growls from either the government or other media entities such as the Press Council of India on these kind of issues. What role does the Competition Commission of India have in such mergers and acquisitions? This is just …
Post a Comment
Location: Mumbai, Maharashtra, India
Read more 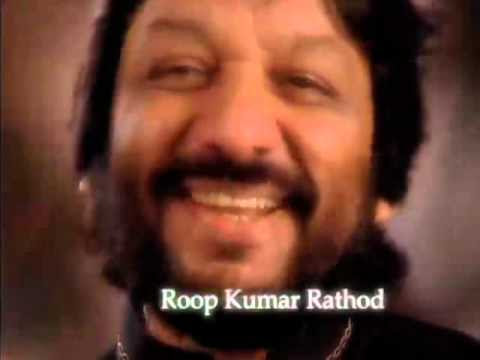 
To commemorate the 150th birth anniversary of Sri. Rabindranath Tagore in 2010, the leading English newspaper The Times of India had launched a campaign called "Jaya Hey". The truth it is that not many know of the remaining four stanzas that make up the National Anthem. These fo…
1 comment
Location: Mumbai, Maharashtra, India
Read more 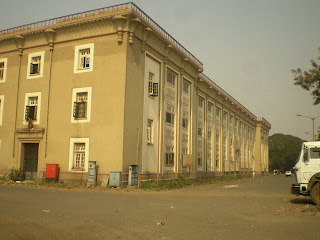 There still exists a Bombay that is distinct from today's Mumbai. No cars honk there and the sidewalks are as wide as today's suburban roads. Alongside the entire eastern stretch of our great city lies a deserted Bombay that has no nightclubs, no multiplexes, no shopping malls, no tall high-rises. Not yet, at least. A walk down its carefully planned avenues will make you eventually wonder at the level of city planning employed by the British rulers over a century ago.

While there are no special privileges granted to journalists that are different from those enjoyed by ordinary citizens. The right of free speech and freedom of the press come from the same Article 19 (1A) of the Constitution. From a strict constitutionalist perspective every citizen, including those who hold power, is a potential journalist--an ideal that has come to its fruition with blogs and the social media. But it would be also naive to suggest that the news media do not have power, like the government, rather they have immense power to shape public opinion, which is a powerful thing. However, as the power of the news media does not come from exclusive privileges and discretionary provisions, regulating the media would also mean regulating the liberties guaranteed to the citizens by the constitution.

Importantly, the company laws already regulate the corporations that own the news organizations and journalists come under the purview of criminal laws…
Post a Comment
Read more

Contemporary journalism is significantly different from the past when very few could read and most of the journalism was produced for and by the highly educated class. Although no specific empirical data on news consumption is available for India, yet the size of the Indian public sphere does suggest that an overwhelming part of the population is watching and reading the news on a daily basis. The news media's main role is to give fact-based information, which does not necessarily require great intellectual abilities. I think majority of journalists do not have the desire to be intellectuals, which is perhaps why they have chosen this profession. Most of the consumers of the news have basic education and in some cases, they are not even literate. In order to stand true to the democratic credentials, journalists working for thousands of newspapers and hundreds of news television channels have to produce and present news taking into consideration the …
Post a Comment
Read more


Is the freedom of the press under threat in India? Not really. Some would argue that it cannot be a mere coincidence that the calls for stricter regulation of the media are coming at a time when the news media have been highlighting corruption in the government such as the 2G Scam and the graft in the organizing of the Commonwealth Games. The media advocacy, often questioned by some, for the movement led by Anna Hazare against corruption has also attracted criticism from the ruling party. Morever, it seems that the criticism of the government on social media is also making some in the government uncomfortable.


A few days ago, Kapil Sibal, the minister for Communication and Information Technology, called for stricter regulation of the chatter on social media sites to check hate speech and protect national security. Earlier, Justice Markandey Katju, the chairperson of the Press Council of India, in his widely reported interview with Karan Thapar and later in …
Post a Comment
Location: Mumbai, Maharashtra, India
Read more

There is no denying that 2011 has been a noisy year. It brought us Justice Markandey Katju, who alarmed, appalled and amused us in turn. To begin with, he was appointed as the Chairperson of the Press Council of India in the last quarter of the year and has been making himself heard ever since. His latest views, put out last week, relate to Internet offences. Before and after him, TV anchors have harangued and heckled and now it is Kapil Sibal's turn to utter first and ponder later. What do we get in response to his call for proactive screening of the Internet? More noise, unsurprisingly. A rising crescendo of free-spirited protests, though some of the offences can hardly be defended.

The noise has been at one level and succeeded at hogging attention while the action has been at another level. Two murders of journalists, 14 attacks on them over the year in different parts of the country, one Home Ministry circular asking for withdrawal of advertis…
Post a Comment
Location: Mumbai, Maharashtra, India
Read more 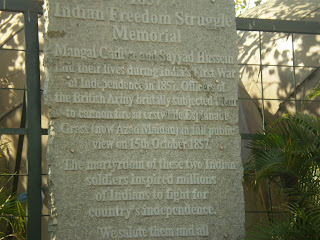 The role of Bombay in the 1857 Sepoy Mutiny can best be described as modest. The Mutiny originated in parts of Northern India which at a later stage in history came to be known as the first struggle for Indian independence. Bombay has always been associated with trade and commerce in its veins and it reacted in a very characteristic manner when the news of the Rising broke out: the stock market bucked.

The Indian Freedom Struggle Memorial is dedicated to the martyrs of the 1857 Sepoy Mutiny in the form of an obscure plinth located on a fence right outside the underground subway opposite the Mumbai Chhatrapati Shivaji Terminus. It is dedicated to two martyrs Mangal Cadiya and Sayyad Hussein.

As the superintendent of the police in Bombay Charles Forjett ordered two sepoys should be tied to mouth of cannon and be blown to bits. He was fluent in the local languages and an expert in disguise and often walked the streets to eavesdrop on conversations to get a sense of trouble brewing. The g…
Post a Comment
Location: Mumbai, Maharashtra, India
Read more
More posts