By Unknown - July 21, 2012
History, for some reason, has always been associated with north India. In fact, a constant grouse voiced by those who come to visit Mumbai as tourists from that part of the country is that "there isn't much to see here." True, we are nowhere close to competing with the legends of the North Indian plains and their long list of rulers and heritage sites or with the artistic temples of the South. But spread across the city are lesser known and some completely unheard of forts which are sure to keep the history buff in you satiated.

The Sion Fort is one such fort which is located within the immediate suburbs of Mumbai. The original name of Sion in Marathi is "Shinva" (शिनवा), which is also known as "Sheev" (शीव ), which means a boundary or an entrance to a city or a village. Sion is one of the seven islands of Bombay and formed the boundary between Bombay and Salsette Islands. Due to its strategic location at the absolute end of the Bombay islands, the area was fortified to act as an outpost and lookout point.

It is located at the summit of a conical hillock and hence the Sion Fort was provided with a small watchtower and one breastwork with 9 to 10 guns, 60 soldiers and 1 captain. Old Gazette records say at the borders of Sion, there was a large gate with a police station. This gate was closed once the cannon was fired at eight pm in the night and the gate was opened when the cannon was heard in the morning. At the mid level, a large fresh water tank was provided which acted as a catchment area of water from the hill top thereby supplying water to the soldiers stationed at the fort. This tank is now dry and overrun with vegetation and can be accessed by means of a flight of steps. There are several small chambers to provide respite from the harsh climate with pitched roofs with country tiles and barge details, similar to the ones which are often found in the Goan-Portuguese house below the main tower.

The fort commanded the passage from Bombay to the neighbouring island of Salsette and was of importance while the Marathas possessed the island, but it now only serves to beautify the scene. An alternative panoramic view from the vantage of Sion Fort, the view opens out to the island of Mahim. In this scene, the walls of the fort dominate the foreground, with the curving line of ramparts and imposing cannons mounted in the battlement wall. The rising staircase and buildings behind the gun carriage are surmounted by a flagstaff asserting British sovereignty over the island. Now, you get a good view of the refineries and salt pans on the east and an aerial view of the Eastern Express Highway.

The fort was built by the Portuguese and occupied by the Marathas and then handed over to the British under the Treaty of Salbai in May 1782, who retained it for a century. The fort was subsequently strengthened by Sir George Oxiden, the Governor of Bombay in 1668 and then by Gerald Aungier who supplied the forts of Mazgaon, Mahim and Sion with cannons. Two of these cannons still exist at the base of the hillock.

The Sion Fort has two ramparts: the Rewa Fort and the Sion Tank. Traditionally, the Rewa Fort has been considered as part of the Salsette islands. Salsette originally consisted of dozens of smaller islands--its local name in Marathi, "Shashti" means "66 villages" which were separated by swampland. The places where the sea entered are between Rewa Fort and Mahim, Worli and Mahim Woods and between Breach Candy and Love Grove. At its Northern Extremity, the Bombay island is joined to that of Salsette by the Sion Causeway and the railway line parallel to it and by Lady Jamshedji's causeway to Bandra. A causeway from Mahim Fort at the Northwest extremity is continued eastwards past Rewa via Sion. The fusion of Salsette into Bombay was brought about through massive land reclamation projects which began in the 18th century and by the early 1900s, they had become one single island, divided from the mainland on the North by the Vasai creek and on the East by the Thane creek. Presently, the Rewa Fort has been ravaged due to the forces of nature leaving behind just a large rock-like bastion. The land that houses the Rewa Fort has been taken over by the Sion Ayurvedic College which now has a garden where medicinal plants and herbs grow as these are prescribed in the syllabus taught by the college. Hence, access to the Rewa Fort has been blocked completely in order to preserve the sanctity of the garden and the plants.

The Sion Tank is also a partial part of the Sion Fort. The tank is surrounded by a Bhavani Shankar temple and a tiny orange coloured idol of Lord Brahma. Most Shiva temples in India have a water body either in the form of a tank, river, pond or lake. According to mythology, it is believed that having a water body in the premises of the temple helps cool down Lord Shiva who is otherwise known for His destructive anger when in the form of Rudra. Before the Eastern Express Highway cut through this sacred land, this was one continuous spiritual place which had seven ponds around it of which only one survives today.

The Sion Fort is located at a walking distance from Sion station and you need to walk eastwards towards the Sion Flyover to reach the fort. The way up to the fort is like walking in a park and has an easy level climb up. The fort is in a dilapidated condition with broken steps, scattered walls and ruins, overrun by trees and excessive ground cover and is marked with lots of graffiti. Despite this, it makes for an ideal location especially for photographers looking for a view of the Eastern Express Highway.
Indiadhanush
Location: Sion, Mumbai, Maharashtra, India

Unknown said…
Good info, bring back old memories of that Rewa ramparts had so much fun there while attending the Our Lady of Good Counsel school in the 80's what a time. Thanks
10 July 2015 at 02:06

Popular posts from this blog 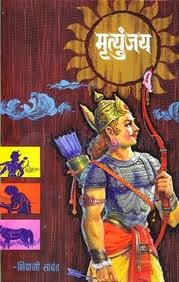 Mrityunjaya: Book: Mrityunjaya Author: Shivaji Sawant Pages: 628 ISBN:  7421-0105 It is often said that the books of our childhood offer a vivid door to our own pasts, and not necessarily for the stories we read there, but for the memories of where we were and who we were when we were reading them; to remember a book is to remember the child who read that book. The timelessness of the epic is witnessed as we continue to name our children after various characters in the Mahabharata. The brave feats of the epic’s warriors still continue to shape our dreams and inspire our films. The Marathi novel "Mrityunjaya" is a classic novel written by Shivaji Sawant on the life of Karna, the greatest tragic hero in Indian history. Despite being dedicated to the life and times of the benign hero, it highlights significant characters from the Mahabharata and also a socio-political frame of the time. To begin with, Karna is the eldest son of the Pandava queen Kunti and Surya, t
Read more 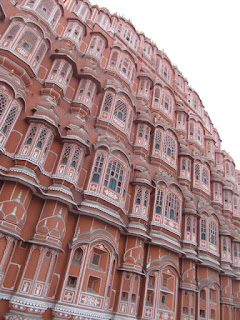 The Hawa Mahal A strong wind blows, stops at the closed windows in mock surprise. It then rushes through the tiny orifices, quietly rising through the narrow spiral staircases and stopping at the other side. The cylindrical balconies now appear stacked upon one another, like a set of different-sized flutes when tied together. From the chaotic crossroads at Badi Choupad in Jaipur, the road slopes down as it goes past the Old Legislative Assembly and Town Hall and the Hawa Mahal appears on the left, in a self-repeating fractal pattern spanning five floors in a series of smaller pyramids.  The Hawa Mahal in its fundamental design resembles a honeycomb structure. It has also been equated as a symbolic representation of Lord Krishna’s crown. The Hawa Mahal was designed by architect Lal Chand Ustad for Maharaj Sawai Pratap Singh.  The original function of the building was to allow women watch processions on the streets below, through the intricate jharokhas, without a threat to the
Read more 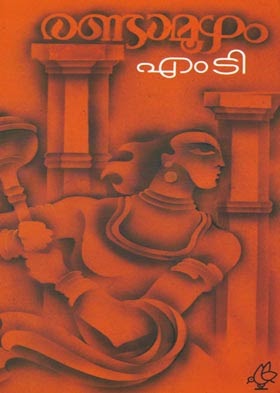 Book: Randamoozham Author: M.T. Vasudevan Nair ISBN: 9788122608311 Pages: 300 The Mahabharata defines the Indian literary sphere. As an introductory statement in the original Sanskrit version states: " The tree of the Bharata (Mahabharata)  inexhaustible to mankind as the clouds, shall be a source of livelihood to all distinguished poets." In hindsight, one realises the truth in such a prophetic statement made by Vyasa. While the Mahabharata has had multiple retellings and interpretations in Indian languages, in Malayalam, the Mahabharata finds a perspective in Bhima, the mightiest of the Pandavas.  Randamoozham begins from the point where Krishna is not such a revered figure but a local king who failed to take revenge on Jarasandha and instead uses Bhima to seek revenge. We have known him as the second Pandava, the mightiest of the five, unequaled in wielding the mace, a fine general in war, a ruthless adversary, a fierce warrior who made every one afraid by his v
Read more